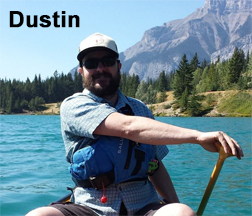 Dustin has worked full-time in the store for a couple summers. He currently instructs part-time in our SUP program and spends most of his summer sharing the wonder of Canada’s Mountain Parks with visitors.

Dustin began working as an outdoor professional in 2004. He guided remote wilderness canoe trips in Northern Manitoba and Northern Ontario and worked at a number of children’s’ camps across Canada supervising high ropes courses, training young adults to be trip leaders and running tripping and educational programs. He spent a year in England teaching all sorts of activities at camps including, climbing, paddling, archery, ATVing, high ropes and fencing.