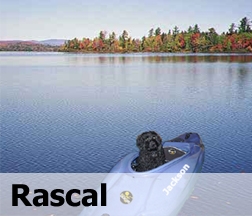 Rascal began working with Undercurrents when he was 7 months old. He passed at the ripe old age of 16 years and 8 months. He was the official greeter, and took his job seriously, though he only worked part-time in his later years. He said the best part of his job was “meeting new people, especially the ones that pat me!”

Rascal was a “Cockapoo,” a cross between a Cocker Spaniel and a Poodle. He stayed active by chasing sticks, running by the river, chasing balls, swimming in the river and chasing toys.

Rascal had almost 200 days of canoe tripping, sea kayaking and SUP’ing under his collar. He secretly loved cats, but was afraid of them?

When Rascal was not working in the store, on the river or running to/from cats, he liked to relax in front of the keyboard and play requests. You can see him playing “Happy Birthday” in the video below (His care-givers seemed to have a lot of spare time?).